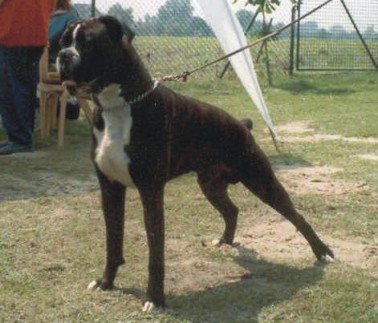 After Dönne had died at the end of my studies in the middle of my thesis with almost 11 years, I could not immediately take a puppy again. But I knew that I absolutely wanted a Boxer again and it should be a son of Dominic vom Viadukt. I had met Nic, who belonged to Franziska Störring, and he impressed me immensely with his calmness and his sovereign appearance. So I asked Franziska to let me know when Nic would mate a good bitch, which would also be worked VPG.
When Franziska called to let me know, I had to cancel because I would not be able to finish my diploma thesis within 8 weeks. She called again after 5 weeks and said that the buyer had 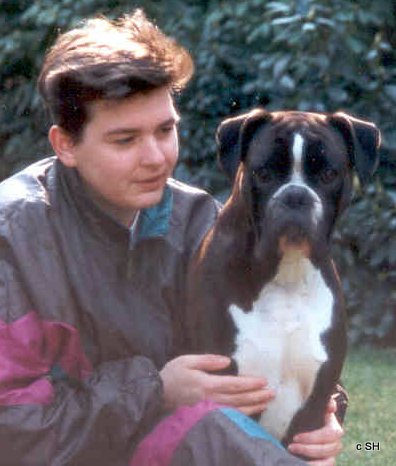 withdrawn, but I should at least go there. Well, so I went with Karl Fischer -our breed warden from the BK Münster- and Vatter to Korbach to have a look at the dog.

We came then into the Souterraine and the small rascals had just eaten and slept. One after the other they came out of the litter box to have a look.
One little "schwatter" came out, ran past everyone else and started chewing on my shoelaces. I bent down and asked what he was doing. At that moment he went up with his head and licked me across the face - what can I say, that was the Ba. So I had no choice but to take night shifts to get ready :)

Ba was my dog from the beginning, he always ran after me like such a little duckling. He was so cute and insanely teachable. I started tracking with him early. After one week he was already tracking a small U. He was born to track. He was a born tracking dog. But also in the Unterordnung and in the Schutzdienst he offered himself very much.

So we could pass our VPG 1 with 292 (100-95-97) points! So I led with him for the first time a Bundessiegerprüfung -today they are called German Championship-. I never thought that I would be able to do that and I owe a lot to my trainer at that time, Anke Aberger!
Altogether we were on 3 VPG DMs, 3 FH DMs and one ATIBOX FH WM! We were state winners 4 times (2 VPG and 2 FH) and had endless successes.

Ba was a great boy and I really thought that this was my sportive highlight. Also privately "the fastest tongue" was popular with everyone. He went with us to every pub, liked to go to Denmark and learned to swim at the age of 6 :) There will never be another like him!