2021 Cejay is with more than 9 years in the well-deserved retirement, sure we still work from time to time what, but mostly we just fool around ;))

Also the first kids from the second litter did their ZTP and AD - unfortunately we couldn't do BH because of Corona :(

Actually I wanted to lead Cejay in 2020 further on FH, but Corona prevented it.

All of Cejay's children from the first (G-)litter, which are sportive led, have already achieved AK and show great in sport!!! We are soooo proud of you!

Cejay passed the IFH 2 on 11/23/19 in Lengerich under LR U. Herrmann. Despite an overflowing object we sniffed very good 92 points.

Also Cejay's 2nd litter was passed without any faults. Thanks to Lydia and Bernhard Knopek for the great breeding! We wish all H's a great and long life with their new families! Nice that you all were in the Holledau at the Hundlerwoche!

Cejay with some H's in the Holledau: 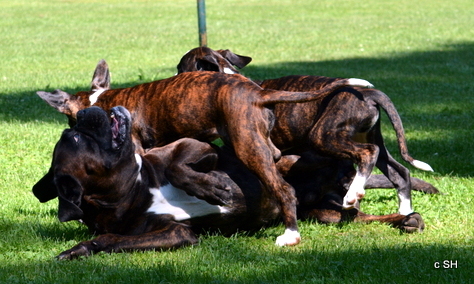 Ultrasound has confirmed it! Puppies are expected in June in the kennel of Alt-Bayern by Donella v. Alt-Bayern and Cejay! We wish Lydia, Bernhard and the princess all the best for the pregnancy and the birth - fingers are crossed!

Cejay had a lady visit and if everything goes well, there will be puppies at the end of May beginning of June - I am already excited!!!

Cejay passed the IFH 2 2 times, unfortunately only passed one - but the tracking field was sprayed and I am glad that nothing happened to him! The 2nd he has passed with 88 P - with a very good tracking performance but unfortunately he missed 2 articles again.

We did a FH 2 in Lengerich on 24.11.18, unfortunately Cejay missed 3 articles (he was not the only one!), but otherwise really nice work with a deep nose and very driven searched! In the end LR R. Berning (ADRK) had 85 points for us!

Cejay's son, sweet Garvin v. Alt-Bayern, has stolen our hearts and will move in with us :) More about Garvin under Garvin's menu entry!

On 09.09.2018 Cejay became daddy for the first time! His Donella v. Alt-Bayern gave birth to 8 beautiful, well-balanced puppies without any problems! 4 boys, 4 girls, 7 brindle and one yellow.  -> here you can visit the HP of the puppies (G-Litter)

11.09.18 Cejay has mated Donella v. Alt-Bayern! If everything worked out, Cejay will be daddy in September!!!

There was a lady to mate with!!! Unfortunately not on the right day, so that she could not be mated - progesterone test probably wrong :(

With nearly 7 years Cejay has finished his active IPO career because of a knee injury at the protection service! It was a great ride my boy! Many thanks to all who supported us. The knee has been restored in the meantime!

In the meantime Cejay has passed the IPO 3 several times and has qualified for three German Championships IPO via 3 LAPs (1x Landesmeister, 2 x Vizelandesmeister)! 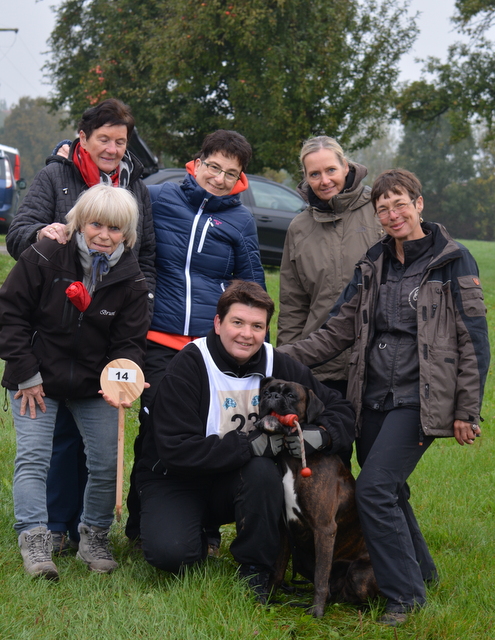 At the German IGP Chamionchips in Oldenburg, Vöhringen and Leipzig of course not everything went smoothly, but I am mega proud of my little one!!! Many thanks to Lydia Knopek for the care on the DMs - you had it not always easy with us :)

Licensing in Peine under judge Inge Gerwin and helper Alex Bartel passed with flying colors! That's how a licensing has to be! Thanks to Triebis and Diekschukltens for the on-site support.

In difficult conditions we passed the FH 2 on 15.03.14 in Münster under trial judge Steffi Hoppe with a satisfying result (72).

Cejay was with me on a HF meeting in the Holledau and we have taken there sovereign the BH on 06.07.13 under Uwe Horst. He did a great job!

Cejay passed his AD and ZTP on 22.06.13 in Lengerich with bravura: dense male, with full, firm grips and very good guarding phases (Spelsberg).

In the meantime Cejay is already 17 months old and has become a big, handsome male with great muscling. He works very impulsively and temperamentally!

Cejay has been with us since 06.01.2012, but has already stolen his way into our hearts! He is a little tickler with a mega sweet expression. He already has his own head now! I hope he is healthy and the rest we will see :).

Cejay has 7 siblings and comes from Herford from breeder Petra Jacobs and goes genetically back to Fausto v. Santana - Festus father.